Fábrega & Arias partnership continued until 1932 when Dr. Harmodio Arias M. withdrew from the firm to serve as the 10th President of Panama, and Dr. Octavio Fábrega became a partner, changing the firm’s name to Fábrega & Fábrega.

In 1936 Dr. Harmodio Arias M. completed his term as President and returned to the firm. The senior partner at the time, Dr. Julio J. Fábrega, stated that for reasons of protocol the name should be changed to Arias, Fábrega & Fábrega, and the name has remained ever since.

Dr. Julio J. Fábrega studied law in the Republic of Colombia at the end of the Nineteenth Century. Dr. Harmodio Arias M. was a graduate of the University of Cambridge and the London School of Economics. Dr. Octavio Fábrega graduated from Harvard Law School (L.L.B.) and Georgetown Law School (S.J.D.).

100 years after its foundation, ARIFA carries on the tradition passing down the believes and solid values established by its founders, to a legal team committed to serving the interests of their clients with the highest professional standards and practical, cost-effective solutions. 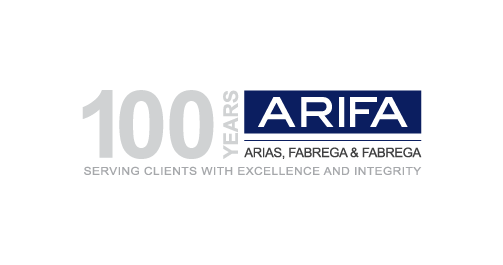 The treaty between the United States and Panama that updated and amended the original Hay–Bunau-Varilla Treaty of 1903 for the Panama Canal and Panama Canal Zone. Other aspects of the treaty covered local trader / worker rights, upgrades and military base usage.

1956-1964
Minister of Finance and Treasury Gilberto Arias Guardia serves as Minister of Finance and Treasury during the administrations of Presidents Ernesto de la Guardia (1956-1960) and Roberto F. Chiari (1960-1964).
1964-1968
Alternate Judge of Superior Labor Court Roy Carlos Durling Cordones serves as Alternate Judge of Superior Labor Court.
70’s–80’s
Contributing to the growth of the National Merchant Marine Eduardo de Alba has an active participation in the drafting of important reforms and additions made to the Panamanian merchant marine law and the maritime legislation.

Eduardo de Alba has been a member of various commissions that have introduced changes to the maritime laws of Panama.

For instance, he participated in the drafting of the laws concerning the preliminary registration of titles of property and mortgages, which was a facilitator of the growth of the Panamanian merchant marine.

Maritime Court of Panama and rules of procedure

A U.S. Federal Court for the Panama Canal Zone handled maritime claims at the Panama Canal until March, 1982 when, as a result of the Torrijos-Carter Treaties, Panama took over its maritime jurisdiction and the Panamanian maritime courts replaced the previous existing U.S. Federal Court in the former Panama Canal Zone. Eduardo de Alba was an active member of the Presidential Commission that drafted the legislation enacted into Law 8 of 1982 whereby the Maritime Court and Code of Maritime Procedures for Panama were created. The Code of Maritime Procedures of Panama was a fusion of the federal rules of civil procedures and the provisions of the then draft of code of civil procedures of 1987.

During the 90's, Gilberto Arias Guardia raised for the first time the idea of bringing at the constitutional level, basic principles of Panamanian jurisdiction and administration on the Panama Canal.

Fernando Cardoze F. first draws the outline of what would become the Interoceanic Region Authority (ARI); the Panama Canal Authority (ACP) as an entity with full autonomy and financial independence; and the bases of Title XIV of the Constitution on the Panama Canal and the development thereof in organic ACP Law 19 of 1997.

Mr. Eduardo de Alba is appointed member of the legal committees of the Presidential Commission that drafted constitutional amendments (Title XIV) on the Panama Canal and the Panama Canal Law.

1992-1994
Director of Air Transportation Sofía J. Cohen serves as Director of Air Transportation of the Civil Aviation Authority of Panama.
1998-1999
New securities legislation Ricardo M. Arango prepares and manages the adoption of a securities legislation in tune with the demands of a developing stock market, with the approval of Decree Law 1 of 1999, in force today.

Estif Aparicio coordinates Panama’s participation in the Doha Round of Negotiations of the World Trade Organization and successfully negotiates free trade agreements with the United States, Singapore, and Chile.

2010
ICAO Third Air Services Negotiation Conference Sofía J. Cohen is appointed Chief Negotiator of the Delegation of the Republic of Panama at the ICAO Third Air Services Negotiation Conference.
2011-2012
Notables Commission Octavio Amat is appointed member of a high level commission of jurists in charge of reviewing and recommending amendments to the Constitution during the administration of President Ricardo Martinelli.
2012-2016
Improving public transportation system ARIFA leads in the multiple financings for the first line, its expansion, and the second line of the Panama City Metro. ARIFA also contributes the new Metro Bus and Panama's road reorganization project.
2015-2017
Protecting Panama’s international services Gian Castillero serves as member of the High Level Committee appointed by the Government of the Republic of Panama for the protection of its international services; and member of the National Council of Foreign Affairs of the Republic of Panama.